With a population of 1.2 billion, it’s hard to imagine that India is being overlooked as a global power. However, many people don’t realize that India’s population is projected to exceed China’s by 2030; nor do they realize that McKinsey estimated India’s middle class is 300 million, and expected to double by 2030. Furthermore, India’s industry & economy is already greater than most nations, apart from the EU, US and China. (As calculated by CIA World Fact Book GDP Purchasing Power Parity.) The business landscape in India has been difficult to track, but there are now detailed reports to research India’s industries in the low-tech manufacturing and services sectors.

Are we ALL the 1 percent?

Despite confusion of the Occupy Wall Street protests, they have a point. For those who would like some facts, here they are:

According to the CIA World Fact Book rank of income inequality, the U.S. is slightly better than in Bulgaria, but we’re worse than Iran, China, and Russia.  As a democracy, that should be embarrassing.

If you’re one of the peons in light blue, don’t feel bad, because you’re STILL at the tops from a global perspective. According to the Global Rich List, a salary of just $35,000 will place you squarely in the Top 5%. Starting to feel like a greedy ne’er-do-well? You can give a donation to help someone truly in need.

How to Partner with a Large Corporation

Congratulations! Your startup is in the final negotiations with a large corporation for a joint venture. Except now they’re asking you to foot the (marketing) bill. It’s becoming less and less clear what they’re bringing to the table. But you’ve been pinning your hopes on this partnership, so it must be a good thing, right?

Here are some considerations.

The Largest Computer Hardware Business on the Planet

Mr. Hurd will bring his expertise running the largest computer hardware  business on the planet to Oracle, where he may be able to revive the fortunes of Sun’s products at H.P.’s expense.

Who do you think wrote that statement? It sure sounds like a press release from Oracle. But it comes from the pen of Ashlee Vance at the New York Times. Does Ashlee even read what he copies and pastes?

Follow a few basic rules of PR, throw millions of dollars at a problem, and it will go your way, right?

A crash course in PR from @BPGlobalPR:

1. Acknowledge the problem without acknowledging specifics. This was our very first tweet:

@BPGlobalPR: We regretfully admit that something has happened off of the Gulf Coast. More to come.
2. Be open about one piece of bad news and no more. You want to appear human, but you don’t want to appear like a bunch of idiots. There’s another word I’d use there, but I don’t think I can. It rhymes with mickleticks.

@BPGlobalPR: Sadly we can no longer certify our oil as Dolphin Safe.3. Threaten legal action if anyone crosses a line. You’re in PR, but you need to make sure you flex your muscle and establish some ground rules.

@BPGlobalPR: Please do NOT take or clean any oil you find on the beach. That is the property of British Petroleum and we WILL sue you.

View the rest of the tips here.

Is the Greece Bailout Big?

Does hearing about another $957 billion in bailout money make you cringe? Bailouts were yesterday’s news. In fact, I don’t even remember what the total U.S. bailout is. As reference, I needed to check Bloomberg to determine we’re passing $3.8 trillion in bailout funds (with many additional trillions committed).

Moving on to Greece…

Greece’s GDP is $356 billion; compared to U.S. GDP of $13,840 billion. Their bailout package is nearly triple their GDP. Now I understand why they’re rioting. 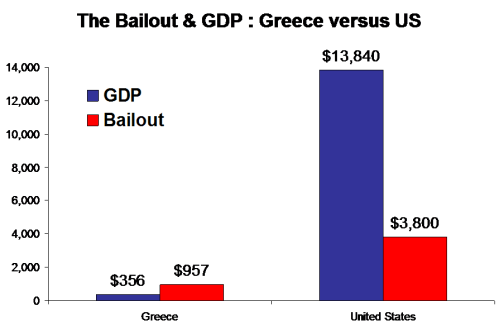 Banker Bonus Tax: UK and France are Doing it. Why not the US?

The UK has imposed a 50% tax on all banker bonuses greater than $40,000. This will be in effect for all bankks – not just the ones that were bailed out. France is in the process of approving similar legislation. In the UK, the  system will work as follows:

Banks will be charged a 50 percent tax on 2009 bonuses of more than £25,000, or $40,800. It will be imposed on the pool of bonuses paid by a bank, rather than individual payments, and it will be paid by the bank — not by the recipient of the bonus. It will take effect immediately and will affect banks’ 2009 profits.

The reasoning is straightforward: the financial firms were responsible for the financial crisis, the loss of millions of jobs, poverty, hunger, homelessness. All firms are to blame – not just the ones lucky and/or connected and/or large enough to get bailed out. So by taxing all firms, it avoids the problem of having bankers scrambling away from the duds and back into the profitable firms. An equal tax makes ’em squirm, but prevents scrambling.

France is in the process of enacting similar legislation.

In the U.S., however, where the average bonus at Goldman Sachs is $700,000 PER EMPLOYEE, yet public outcry has been muted. Even as Obama calls Wall Street to task, he hasn’t done anything about it. Is that likely to change? Probably not in the near future. The public appears to be beaten down enough to accept extreme inequality as the norm and continue to go about their lives as best they can.

Why the Department of Defense Failed to Secure Our Computers

Every day, new viruses emerge that compromise the security of millions of computers – both personal and corporate. As government agencies increasingly rely upon commercial software for Top Secret computer systems, they found themselves facing a difficult dilemma: continue using their 80’s era software or upgrade to the latest commercial systems, while exposing themselves to the security vulnerabilities that plague everyday users.

From 1999-2001, Robert Meushaw, the director of the NSA’s Information Assurance Reserach Laboratory (NIARL), and his team worked on a solution that coul dgive hte best of both worlds. The system he developed, codenamed NetTop, uses a “sandbox” technique whereby inherently insecure software (such as Microsoft Windows and MS Office) is granted access to a limited portion of the computer. Even if one of the insecure applications was infected with a virus, it is unable to spread beyond the specific machine.

Unfortunately, the results were disappointing. Two crucial missteps ultimately led to its slow adoption within government agencies and by the general public.

The first problem was that NetTop compromised security for functionality. By being neither 100% secure, nor 100% functional, security experts were unsatisfied, and users were frustrated.

The second problem was around cost. Each “virtual” system required its own licenses. Thus, Top Secret computers that accessed six separate networks would require 6 licenses for Microsoft Windows on a single computer! Furthermore, the virtualization component was developed by a for-profit startup named VMWare (now publicly traded NYSE: VMW). As VMWare grew larger and more successful, Microsoft started to tamp down the competition by restricting its licensing terms to make virtualization even less cost-effective.

The end result has been another expensive government project with limited application and a dim future.