Uber raised $1.2 billion that valued the company at $41 billion. Some people are skeptical that Uber could have the same market cap as Time Warner Cable or ADP. Projecting future P/E may give some idea of the scale and scope of Uber.

Factoring in the rest of the world (based on GDP) brings the P/E ratio to 33x.

In sum:  33x forward P/E ratio for the startup assuming 50% control of the industry throughout the entire world. The S&P 500 is cheaper.

So, perhaps Uber has grander visions – ride share / carpooling, car share, ambulance service logistics, military applications…. there must be a larger market it plans to tap into, or its latest investors got caught up in the hype.

Why the Department of Defense Failed to Secure Our Computers

Every day, new viruses emerge that compromise the security of millions of computers – both personal and corporate. As government agencies increasingly rely upon commercial software for Top Secret computer systems, they found themselves facing a difficult dilemma: continue using their 80’s era software or upgrade to the latest commercial systems, while exposing themselves to the security vulnerabilities that plague everyday users.

From 1999-2001, Robert Meushaw, the director of the NSA’s Information Assurance Reserach Laboratory (NIARL), and his team worked on a solution that coul dgive hte best of both worlds. The system he developed, codenamed NetTop, uses a “sandbox” technique whereby inherently insecure software (such as Microsoft Windows and MS Office) is granted access to a limited portion of the computer. Even if one of the insecure applications was infected with a virus, it is unable to spread beyond the specific machine.

Unfortunately, the results were disappointing. Two crucial missteps ultimately led to its slow adoption within government agencies and by the general public.

The first problem was that NetTop compromised security for functionality. By being neither 100% secure, nor 100% functional, security experts were unsatisfied, and users were frustrated.

The second problem was around cost. Each “virtual” system required its own licenses. Thus, Top Secret computers that accessed six separate networks would require 6 licenses for Microsoft Windows on a single computer! Furthermore, the virtualization component was developed by a for-profit startup named VMWare (now publicly traded NYSE: VMW). As VMWare grew larger and more successful, Microsoft started to tamp down the competition by restricting its licensing terms to make virtualization even less cost-effective.

The end result has been another expensive government project with limited application and a dim future.

Three Things Every Business Should Do in a Recession

Change begets opportunity. Given the current economic situation, here are three things that every company should do:

Renegotiate vendor contracts. This is not to say that you should squeeze all profit out of your vendors. Business relations should always be mutually beneficial. However, contracts that were negotiated a few years ago when things looked rosy should be carefully reevaluated. For example, one small business was able to renegotiate their contract with Verizon Business and cut their bill in half.

Foster employee loyalty. Employees are more likely to stay at their jobs now, if they feel the jobs are secure. The good news is it’s easier to retain employees. But don’t be lulled by this. Unhappy employees being forced to work harder and longer hours will not stick around once the economy turns. Now that employee’s expectations are lower, do small things to increase job satisfaction and make people feel appreciated.

Do more for your customers. Much advice centers on how to maintain price discipline and avoid doing work at (or below) cost. There’s a different opportunity, however. Given that your customers are likely facing a new environment, they may be open to help in new, adjacent areas. For example, a company that downsized may now be shortstaffed in certain areas and happy to have a vendor provide managed services. Look for these areas, and propose solutions for your customers’ problems.

The goal is to shed light on  small businesses in “main street” industries by providing accurate and detailed statistics.

The MMOG market is expected to double in the next five years. MMOGs differ from typical computer games because they are perpetual virtual worlds, meaning that users can continue to play forever building on previous play. New players are constantly starting to play these game and continue playing them, creating a snowballing user base.

Traditional game developers are beginning to discover a new sources of revenue from MMOGs. The developers typically offer a free version or trial period to attract users, and then a subscription-based version (typically $10-$20/month) to keep the on going revenue stream. In the future, MMOGs are likely to generate additional revenue through advertising and non-traditional revenue sources such as virtual sale items.

Overall, DFC Intelligence estimates the market will double by 2012, reaching $13B worldwide. Half the revenue will come from East Asia, 25% from North America, and the remainder from Europe and Japan.

The 15 largest MMO Games are as follows: 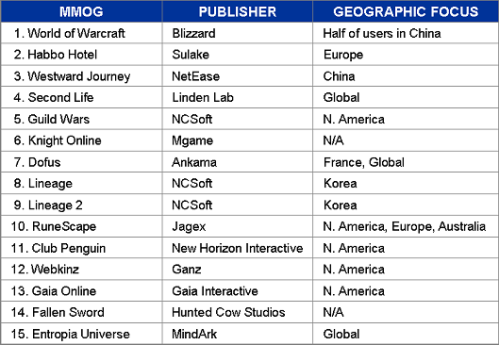 Of these fifteen MMOGs, the fastest growing (based on 2006-2007 subscribers) are:

Additionally, the following venture-backed MMOG developers are likely to launch in the next 1-2 years:

MMOG HOSTING and IT REQUIREMENTS

Whether an MMOG game developer is hosting a game in-house or outsourcing it to a hosting company, the following three issues are most important in selecting IT vendors:

The largest IT vendors for the MMOG market are IBM, HP, and Dell.

A vendor seeking to serve the emerging MMOG market should take the following approaches:

1) Target both large MMOG developers that do their own hosting and also outsourced MMOG hosting companies. To avoid competing on price, focus on system stability, scalability, and management tools that can support the MMOG environment.

In order to assess exactly how a company can enter this market, it is necessary to understand how the company is currently positioned. The Ansoff matrix provides a basic framework to understand what type of entry is needed – based upon a company’s product portfolio and market space.

One of the immediate next steps to take will be to benchmark your company’s current status along key dimensions. Using a “Points of Differentiation” graph, it is possible to tailor the go-to-market strategy to take advantage of the company’s strengths.

In the example above, a company may be strong in performance, reliability, average in scalability, reputation, service and price, and weak in value-added services. After analyzing other vendors using a similar framework, a company with these particular points of differentiation might choose to focus on midsized MMOGs with 100k-200k subscribers.
SOURCES

In a recent article, John Hagel articulates a remarkable theory regarding product innovation:

Hagel believes that given this change, product and process innovation no longer produce a positive return on investment; thus a new kind of innovation is needed – “Institutional Innovation.” The organization must become a living embodiment of innovation. This includes

But before you go re-engineering your company, beware…

“Institutional Innovation” is a path that few companies have successfully executed.

Perhaps there is an easier way, an approach to product innovation that can still produce positive ROI, even in the current climate. The approach I’m thinking of is something I’ve called Growth Explosions. Yes, have diversity of ideas. Yes, have relationships crisscrossing the organization. Yes, have feedback loops. But more importantly – lean how to watch for and exploit once-in-a-lifetime opportunities. For they actually come along more often than that.

With a little bit of product innovation, a strong tailwind of market demand, a good nose for opportunity and a dash of luck – a company should focus on cashing in on black swans as they drift by.